Enforced lock-down thanks to the COVID-19 pandemic has provided ample opportunity for each of us to reflect on our “purpose” – especially if we typically identify our purpose with going to the office or other workplace (and the time spent on our daily commute).

In addition to the mandatory furlough, the inability to do the everyday things we usually take for granted can create some sort of existential crisis. So even though many of us continue to work from home, there is a very practical purpose in having a structured routine (including the all-important daily exercise allowance!) – for both physical and psychological needs.

But this time of reflection also provides an opportunity to reassess our priorities, and re-calibrate what is important to us, once we get through the pandemic. It feels that the paradox of having more time on our hands, but fewer options as to what to do with it, might mean we should be jealously protective of how and where we spend it once we get the chance.

So some of the factors we may consider in deciding how we spend our time and how we define our purpose might include:

While “time spent” shouldn’t be the defining criteria of our purpose, as a valuable (and finite) resource, how we allocate our time should be a significant measure of what is important to us, and what enables us to pursue our purpose.

There’s been a renewed debate recently, about corporate purpose: why do companies and organisations exist?

Partly it comes from a shift in the balance of power – from access to resources, markets and technology, to the future of work offering people more choices in the ways they can generate their living.

Whether companies face disruption or decay, their purpose has to change and adapt accordingly – look at how Kodak is backing a project to issue cryptographic tokens to help professional photographers track the use of their IP.

Equally, employees are more invested in working on interesting ideas, and more interested in working for businesses that align with their values, rather than buying into a corporate purpose. So it’s as much about the “how” of an organisation as much as the “what” and the “why”.

I sometimes find it hard to feel much empathy for companies or industries that become outmoded – although I can feel some empathy for the people who lose their jobs as a result. However, if the political and economic response to declining industries is to focus on job losses (or job subsidies), it tends to overlook where the new opportunities are actually coming from – even though this growth does not always offer traditional jobs or work/career options. Equally, individuals need to adapt to the changing work environment – no-one can be sure of a “job for life” anymore, no matter how much some of our political leaders would like to think otherwise.

If we look at the traditional function (not the same as purpose) of many companies, it was to harness certain resources in the pursuit of creating assets or wealth. So, companies were once really good at sourcing and managing financial capital, human capital, and intellectual capital. They were even “better” at this if they had monopolistic access to, or operated within, highly controlled and tightly regulated markets.

Now, of course, thanks to disruption and other forces, companies no longer have a monopoly on these resources, as many markets have become outsourced, open source, disintermediated or decentralised. Rather than being formed by shareholders and other stakeholders for long-term ventures, “companies” can just as easily be a collective of self-forming, self-governing and self-aware resources that combine for a specific objective, for as long or short a time as the objective or enterprise requires. And technologies like Blockchain, digital assets and smart contracts will determine how, and for what reason, and for how long such entities will exist, and the resources they will require.

Next week: More musings on ICOs and cryptocurrencies

Regular readers may be familiar with the name Carolyn Tate from my previous blogs on purpose, and the Slow School of Business. Last week, Carolyn launched her latest book, The Purpose Project, a distillation of the past seven years of her work, and quite possibly a road map for anyone wanting to take control of their own destiny at work. 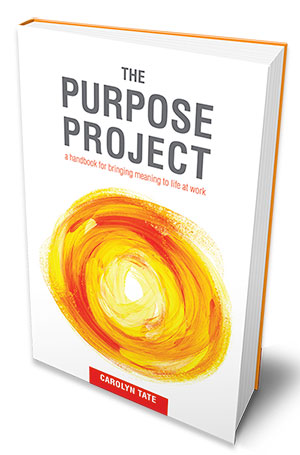 I would describe The Purpose Project as a cross between a first aid kit for a disillusioned workforce and a survival guide for the modern workplace. But as with defining your own “purpose”, the value is in the mind of the reader, rather than in any prescriptive solution or outcome.

Having spent the past few years working with Carolyn at Slow School, I know that her views on this topic have subtly changed. Slow School itself initially appealed to, and was designed for, independent consultants (“solopreneurs”) and aspiring consultants (“corporate escapees”). But as the concept of finding purpose in our work has started to take hold, Carolyn now encourages her readers to find their own purpose where they are, rather than rushing headlong into a new job, a new company, a new career or even into entrepreneurship (which as we know, isn’t for everyone).

I first connected with Carolyn at the Slow School, when I was exploring my own purpose as an independent consultant (and sometime corporate escapee….). Slow School provides a community of like-minded souls with a “safe” space to test new ideas, a playground to kick around new concepts, and an environment to challenge our own assumptions. Unsurprisingly, a key part of The Purpose Project is a list of 50 questions designed to help readers dig deeper into their own purpose, modeled on the Japanese concept of “ikigai”. There are also some tools and practices to bring purpose to life in our current work.

In my own case, I still think my purpose is a work in progress, and is never settled – much of my career has been driven by a need for new ideas and experiences, work that is intellectually stimulating, and a willingness to engage in continuous learning (while feeding an enduring curiosity and maintaining a healthy dose of skepticism). These factors, even more than formal qualifications or faddish management theories, have helped me to build resilience and navigate a rapidly changing work environment.

One point where I may disagree with Carolyn is this notion about finding purpose through staying in your current role or workplace – that it’s not necessary to leave. While I agree that it may be possible to reshape your current job to suit your personal needs and preferences, staying in an unrewarding job or remaining with an organisation that does not value you is like persevering with an unhealthy relationship.

In short, I’m quite pessimistic about the ability for large corporations and large institutions (as they are currently framed and constituted) to help us connect with our individual purpose, or even to provide the space to do so. And of course, rapid changes in the very nature of work, the way we work, the economic structures and business models that have traditionally underpinned employment and the value exchange of labour require us to take more control over where, how and with whom we choose to spend our working time.

It’s two months since my father passed away, and nearly a year to the day since he went into hospital for scheduled heart surgery. Sadly, although the operation itself appears to have been a success, the ordeal seemed to trigger a whole series of complications and underlying conditions: within 6 months he was admitted to a dementia ward, and by late last year, he was in a nursing home undergoing palliative care. Less than three months later, he passed away, the shadow of his former self.

I was able to spend several weeks back in the UK over Christmas and New Year, visiting him up to three times a day. Most of the time, he was living in his own little world, and I would simply sit with him and listen to some of his favourite music, mainly baroque and opera. But in his lucid moments there were flashbacks to the distant past, and some recollections of more recent memories. On one occasion, even though he had lost most of his capacity for speech, he did manage a sage piece of advice: “Don’t play with fire”.

More recently, I was in the UK again to scatter his ashes and help sort out his study and his workshop. Memories of impromptu DIY lessons came flooding back. There were also several quirks and surprises in his personal archive: photos of him at management conferences in the 1970s and 1980s, a scrapbook of his time in Germany in the late 1950s during National Service (including some chilling images of Belsen), and a spreadsheet showing his annual income and income tax right up to his retirement.

Although he was fortunate in being able to take early retirement in his late 50s, he spent the next 25 years volunteering, building a portfolio of interests and serving on multiple committees for the arts, small business, veteran affairs, U3A and other community projects. My mother likes to joke that he’d rather chair a committee than mow the lawn. He also continued to learn, and I found recent certificates of proficiency for speaking German, and for formatting Word documents (very handy for writing up agendas and minutes).

He was the product of a classic liberal education, not a polymath, but possessing a solid knowledge about lots of different things: the arts, politics, language and history as well as science and technology. All the things you need to solve The Times crossword.

There are probably three key things that my father taught me:

The latter is particularly useful when working with clients on their business reviews!