At the risk of sounding like a broken record, here in Melbourne we are waiting for signs that the State Government is preparing to lift some or any of the restrictions that have kept us in Stage 3 & 4 lock-down for most of the past 7 months.

Data on new cases and community clusters released over the past few days suggest we won’t be “getting on the beers” with our mates any time soon, and certainly not with the Premier’s blessing.

The slow drip feed of information at the Premier’s daily press conferences, and the painful revelations at the recent Board of Inquiry into the failed hotel quarantine program, somehow suggest a Head Teacher who is forever saying, “This hurts me more than it hurts you” before handing out another punishment. Believe me, the audience increasingly feels like it is being tortured for its own good – because even though most of us understand why we had to have the first lock-down, the blatant failures within government, the civil service, certain public agencies and their private sector contractors have made it seem we are paying for their mistakes.

In Roman times, the general populace stayed docile as long as there were “bread and circuses” to feed and entertain them.

Now, apart from some toilet roll shortages early in the piece, and the occasional binge shopping on pasta and tinned tomatoes, by and large, the supply chains have been kept open, and the supermarket shelves replenished. (Some small grocers and independent producers may actually have benefited, as people are forced to shop local, and as restaurants pivoted towards cook-at-home meals – but equally, others may have been forced out of business if the major chains have used their market power to commandeer supply. Hopefully, the ACCC under Rod Sims will be keeping the latter honest.) Plus food delivery services have flourished due to the increased demand. So most of us can’t be said to be going hungry (although food banks have likewise never been busier).

So, in the words of Kurt Cobain, since we are still in lock-down, “Here we are now, entertain us!”

Box set bingeing and non-stop streaming only get us so far (I gave up about 3 weeks into lock-down Part 1). Broadcast sports are patchy given the limits on live crowds. Home-gigs/domestic-busking are not the same as a night at The Corner Hotel in Richmond. The lack of access to cinemas, theatres, galleries and museums means my need for culture is not easily satisfied. And while I have been digging into my library, revisiting classic albums, and trawling the BBC sound archives (as well as creating my own electronic music), the additional stimulus provided by in-person and on-location events is sorely lacking.

It’s clear that many of our artists and performers are also struggling, but their particular plight is not being fully recognised or acknowledged. In the UK, for example, the arts and entertainment community argues that their industry is under-appreciated for the financial contribution it makes to the national economy. This is not to overlook the social, cultural and mental health benefits of a thriving creative sector.

Meanwhile, the tedious cat and mouse game being conducted between the Premier and some sectors of the media (plus the highly divisive commentary generated by the Premier’s fervid supporters and detractors on social media) is no substitute for proper entertainment – and even though a couple of heads have been dispatched thanks to the Board of Inquiry (so, that was a thumbs down from the Emperor?), the lock-down song remains the same. Time to change the (broken) record?

Enforced lock-down thanks to the COVID-19 pandemic has provided ample opportunity for each of us to reflect on our “purpose” – especially if we typically identify our purpose with going to the office or other workplace (and the time spent on our daily commute).

In addition to the mandatory furlough, the inability to do the everyday things we usually take for granted can create some sort of existential crisis. So even though many of us continue to work from home, there is a very practical purpose in having a structured routine (including the all-important daily exercise allowance!) – for both physical and psychological needs.

But this time of reflection also provides an opportunity to reassess our priorities, and re-calibrate what is important to us, once we get through the pandemic. It feels that the paradox of having more time on our hands, but fewer options as to what to do with it, might mean we should be jealously protective of how and where we spend it once we get the chance.

So some of the factors we may consider in deciding how we spend our time and how we define our purpose might include:

While “time spent” shouldn’t be the defining criteria of our purpose, as a valuable (and finite) resource, how we allocate our time should be a significant measure of what is important to us, and what enables us to pursue our purpose.

Following the so-called roadmap to reopening the Victorian economy, this week I was sorely tempted to vent my anger and frustration at the situation we find ourselves in Melbourne – a situation in large part due to the failure of the hotel quarantine programme, which has been identified as the source of the community transmission, and the consequent devastating impact on the aged care and health care sectors. (Unlike our politicians and civil servants, I refuse to use the term “settings” – “settings” are what you use on a microwave oven…..). I was going to describe how our current Federal and State leaders decline to take specific responsibility for their respective Administration’s mistakes, while continuing to treat the citizens of Melbourne like a political football…. Instead, I decided to be more hopeful, and reflect on some of the positive aspects of the continuing lock-down. 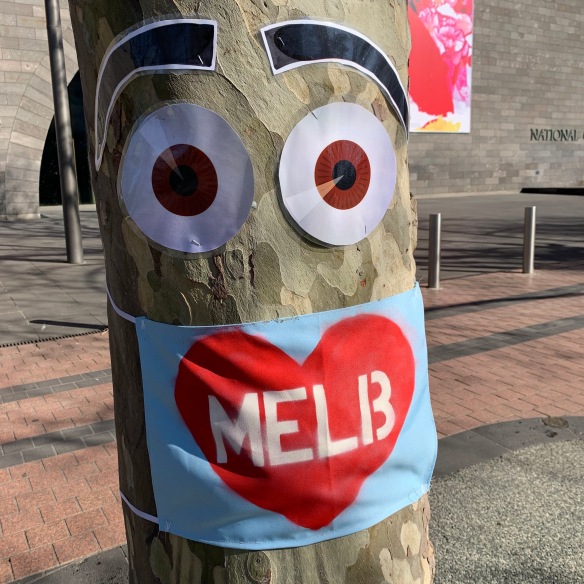 First, most of us are still here, and most of us remain healthy – and although I have not socialized with family or friends for 6 months, I can still have Zoom calls and virtual drinks.

Second, despite the lack of social interaction, thanks to “no contact” front doorstep drop-offs, friends and neighbours have provided small gifts such as home-made bread and home-grown herbs and vegetables.

Third, on-line shopping has got a lot better, despite some of the shipping delays – on the downside, I probably won’t be in a hurry to revisit bricks and mortar retail….

Fourth, by not eating out, and by not using public transport, I’m saving money – some of which is being redirected to small luxuries such as dine-at-home restaurant meals and domestic gadgets.

Fifth, my local green space, Yarra Park is thriving, because the lawns are not being used as a car park several days a week – it’s actually encouraging more people to use it for its original purpose of public recreation.

Sixth, courtesy of the 1-hour daily exercise regime, on my walks I have been exploring parts of the City that I thought I knew well, often discovering new historical aspects or architectural features I had never noticed before (and all within a 5km radius of my home, of course).

Seventh, when I do venture out for food shopping, thanks to the limits on numbers, the supermarket is less crowded and the experience is actually far more relaxing than when having to shop in normal peak hours.

Eighth, the enforced and extended work-from-home regime means I have come to appreciate my domestic surroundings, even though it can get a bit claustrophobic being cooped up most of the time.

Ninth, I have found time to finish and release a new album on Bandcamp (thanks to the few generous souls who have actually paid to download it!).

Tenth, notwithstanding some testing days, I find that after nearly 25 years, my relationship with my significant other has proven to be remarkably resilient.

So, on reflection, I can think of far worse situations and locations to be in. I know I will get through this, and although things will never be “normal” again, I think I will have re-set my personal priorities and regained a sense of what is or isn’t important. It’s been a hard lesson (and continues to be a challenging experience), but hopefully it will bring long-term benefits.