The problem with a prodigious talent like Pablo Picasso is: how or where do you begin to make any sort of meaningful assessment of his work? He lived to a ripe old age; he was extremely prolific across multiple media; he befriended so many artists and writers; and he had numerous wives and mistresses, his personal life is a rich subject all on its own. Every few years, a new insight comes into focus, via major retrospectives or academic studies. The closest we have to an official biography extends to 4 volumes, and has so far only reached 1943 (Picasso died in 1973). Then there are the record-breaking art auctions…

So it must be with some trepidation that visitors approach the latest example of “making sense of” Picasso – the NGV’s current blockbuster exhibition, ominously titled “The Picasso Century”. The sheer volume of his output, the breadth of techniques and the range of styles can be overwhelming. This major exhibition (drawing mainly on the collections held in the Centre Pompidou and at the Picasso Museum, Paris) is arranged fairly conventionally, in chronological order, and reflecting the major periods of Picasso’s work.

There are glimpses of the post-impressionist Blue Period, the flirtation with Primitivism and Fauvism (which sparked a life-long rivalry with Matisse), and his dominance of Cubism (although both Braque and Gris gave him a run for his money). Plus the importance of people like Gertrude Stein who, initially through her brother, became an early admirer, friend and collector.

Then there is his association with the Surrealists, although I’ve never felt he fully embodied their movement. Sure, he was instrumental in furthering their aims, he counted many of its practitioners as close friends and associates, and he participated in many of their exhibitions, manifestos, happenings and publications. But Picasso did not really pursue the juxtaposition and sub-conscious of major Surrealists such as Dali, Magritte or Ernst. That’s not to say Picasso didn’t reveal his sense of humour or his liking for fantasy – but unlike some of his peers, he was always in control, nothing was left to chance, and even his re-telling of ancient myths and legends was self-serving and relatively orthodox.

First and foremost, Picasso was an excellent draftsman, and his lines and mark-making were always deliberate, distinctive and revealing – as seen in some of the archive footage of Picasso at work in his studio. (I think the dismissive argument that “any 3 year old could have drawn that” has long been debunked.)

Of course, when there are so many works to choose from, the curators are spoiled for choice, and narrowing down this selection must have been challenging – even though they stick gamely to their particular narrative(s), resulting in a balanced and consistent presentation. There are a couple of insights which I did find refreshing – Picasso’s association with Wilfredo Lam, and his dabbling in political themes (mainly stemming from his membership of the Communist Party in France). The one weakness in this exhibition is the extensive display of ceramic plates from Picasso’s later years. I’ve never been a fan of these pieces, as I don’t think they add much to his body of work. There is a sense that he would make these almost on demand, and had them at hand for when visitors and souvenir hunters tracked him down to his studio.

Nonetheless, this exhibition is highly recommended, and provides yet another excuse to admire the work of Picasso’s peak artistic years, from 1909 to 1949. Prior to that period, he was still finding his artistic voice (and creating his own myth); and after that, he found himself having to live up to (and even exaggerating) the myth he had built up for and around himself. Whatever else this exhibition may reveal about his life, the work is still what counts.

Next week: An AI Origin Story

Melbourne is a well-known destination for the arts – with its major festivals, winter blockbuster exhibitions, and live music scene. The city itself is often the setting, not just the host – witness Open House, White Night, and more recently RISING. As the backdrop, canvas or screen for these events, Melbourne largely draws on its built environment. In contrast, and as the latest example to join Melbourne’s art calendar, the Royal Botanic Garden is currently hosting Lightscape, a major exhibition that literally sheds new light on its historic collection of flora, and allows us to enjoy the city’s lungs at night, when the gardens are usually closed.

The key pieces as you tour the installations are:

1. Sea of Light by ITHICA Studio – the sequence of programmed lights create an impression that the lawns are moving, rather like waves on the shore

2. Liquid Sky by Genius Laser Technology – lasers reflect on layers of mist sprayed among the foliage, creating psychedelic clouds in the night air

3. Winter Cathedral and Laser Garden, both by Mandy Lights – the former is a series of illuminated arches made from strings of fairy lights, that give the impression of a more solid structure; while the latter projects lasers into the depths of the fern gully, that flicker like fireflies.

4. Flower Lawn by Jigantics – enormous “plants” that are lit up by a changing sequence of colours

Throughout the gardens, there are a range of animated lights, illuminated displays and projections. I’m sure everything has been carefully designed and planned, but there are some happy accidents: the lasers from Liquid Sky extend beyond their misty clouds to flicker amongst the foliage of surrounding trees; many lights reveal the natural iridescence of flowers that we are unable to see by day; and the reflection of the Winter Cathedral on the nearby lake suggests the climactic scene in Peter Carey’s novel “Oscar and Lucinda”, when the crystal chapel sails down the river.

The only disappointment about Lightscape is the choice of audio to accompany the installations. The sound quality is fantastic, but the actual music is quite conservative, even pedestrian – at times, I was expecting a David Copperfield reveal. I wonder what artists such as Oren Ambarchi or Lawrence English would have done instead – a missed opportunity?

For the next couple of weeks, an exhibition of work by William Kentridge is showing at Australian Galleries in Melbourne – and I highly recommend it. If you are familiar with his art, you’ll know what to expect; but if the name is new to you, then hopefully you will be curious enough to give it a go. Kentridge is both prolific, and proficient, across many media – this current exhibition includes prints, drawings, sculptures, tapestries and films.

I think I first became aware of Kentridge’s work via his multimedia installation, “What Will Come (has already come)” when it was shown at the Städel Museum, Frankfurt in 2007. Thanks to his distinctive style and use of recurring motifs, once you see one of his prints or drawings, you can easily recognise other pieces by him. Using a graphic-based visual language and free-flowing lines in his mark-making, he also incorporates polemic and performance into his work. In addition to his stage design and production, his films and stop-motion animations portray the artist as actor, literally sketching out his lines across paper, wall and screen. Images of coffee pots, oil rigs, megaphones, tripods and windmills feature in many of his works, and he is also drawn to three key texts: Mozart’s “The Magic Flute”, Alfred Jarry’s “Ubu Roi”, and Nikolai Gogol’s “The Nose”.

Since that first encounter in 2007, I have been fortunate to see a few of Kentridge’s key exhibitions, most notably “Five Themes” (2010) at MoMA, New York (which later came to ACMI, Melbourne), and “Thick Time” (2016) at Whitechapel Gallery, London (and later at The Whitworth, Manchester). I also hope to see his major retrospective at London’s Royal Academy later this year.

All of which makes this exhibition at Australian Galleries a remarkable achievement for a local commercial space. If there is one piece that could sum up Kentridge’s artistic CV, it would have to be “Black Box/Chambre Noire” (2005) – this YouTube video does a pretty good job, but you need to see this mix of installation, automata, video, sculpture and audio in the flesh to appreciate the full effect. Luckily, there is a related video, “Preparing the Flute” (2004), based on a similar installation work, in the current show in Melbourne.

Q: What do a selection of 19th century oil paintings, a 50-year old piece of 16mm film, and a 21st century carpet have in common?

A: They are all exhibits in ACMI’s winter show, “Light”, based on works from the Tate’s Collection. 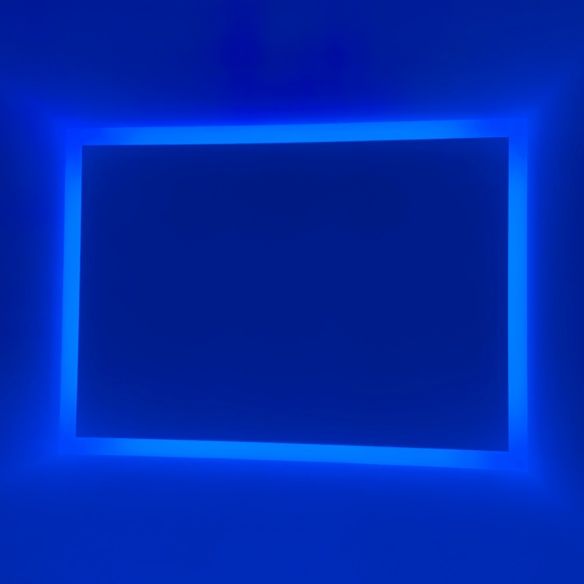 Despite ACMI’s brief to showcase the moving image, only three of the art works in the exhibition consist of film. A few more incorporate movement in the form of kinetic sculptures. But otherwise, this is mostly a collection of paintings and photography (and yes, a carpet).

Does it work? Yes, because just as light can be regarded as an essential building material, the use, portrayal and capture of light is essential to render colour, shadow, depth, perspective and narrative in all forms of art.

Arranged thematically, by theory or technique of how light is represented and rendered in art, the exhibition is both diverse and cohesive. It avoids the risk of overload because the selection is quite compact (given the wide remit of the topic). It also avoids choosing works based on technical prowess alone. Therefore, the exhibition succeeds through the combined principles of quality over quantity, and content over form.

It was timely to see mention of The Enlightenment as a key source of artistic exploration, as well as being a driver in the fields of of scientific discovery and liberalism. The exchange of ideas between and across different disciplines has always been essential to progress in the sciences, the arts and the humanities.

My favourite exhibits among the works I hadn’t seen before were by Olafur Eliason, Lis Rhodes and Peter Sedgley. And it’s always a pleasure to immerse yourself in one of James Turrell‘s installations. The only slight disappointment was that visitors are kept at quite a distance from Yayoi Kusama‘s The Passing Winter, an intriguing cube-shaped sculpture that is like one of her infinity rooms in miniature. The last time I saw it in London, it was possible to peer right in to get the full effect.

All in all, highly recommended.

Next week: Hands on the wheel