In a recent blog on Auckland, I mentioned seeing some Maori artifacts or Taonga during a gallery tour. The curator had mentioned that these objects raise questions of whether they are art, or craft. Does the distinction matter? Not necessarily, but I think it’s important to understand the difference between craft (largely skills-based) and art (largely aesthetically-driven). Often these concepts overlap, and are sometimes misconstrued, which in turn influences how we attach value, appreciation, importance and significance to particular objects. 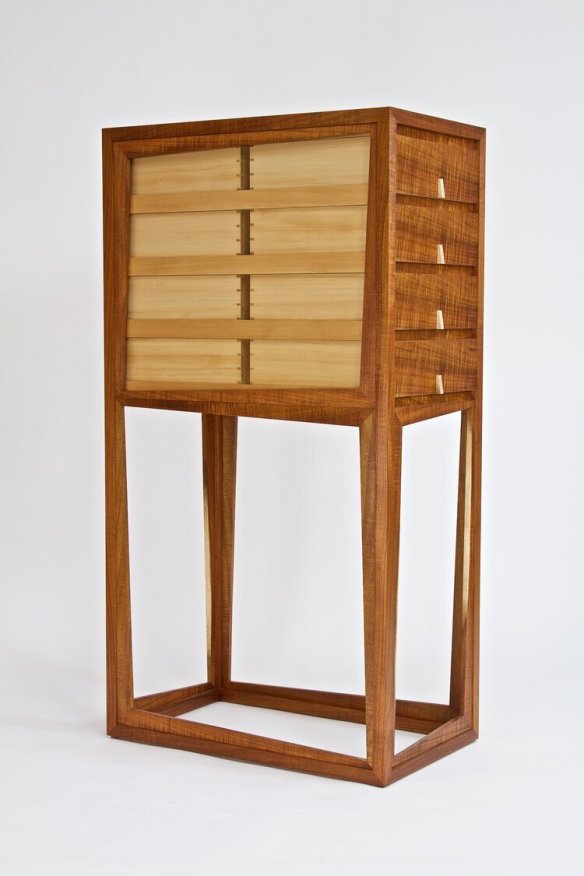 Anton Gerner, A Cabinet With No Front Or Back 2019, Fiddleback Blackwood, Celery Top Pine. (Image sourced from Craft Victoria)

What often gets viewed as “pure” art is more a result of design, technique and skill – attributes which are more usually associated with craft (or “applied” art). Indeed, it is noticeable how viewers seem to appreciate “effort” over “creativity”. A great number of exhibitions I see in contemporary art galleries are more about illustration, decoration and process – and it’s as if the time taken to create the work or the complexity of the object is more important than the actual aesthetic outcome.

On the other hand, a lot of work that is assigned to the category of “craft” is capable of sitting alongside sculptures and 3-D work in an art gallery. Equally, a lot of work (especially in the fields of ceramics, textiles and jewellery) has neither the aesthetic form to be considered as art, nor the functional form to be regarded as craft.

For me, craft involves considered decisions about the choice of material, the design and production process, plus the intended function (even if the latter is only for decorative purposes). Whereas art is usually undertaken for the purpose of arriving at an intended creative outcome, with the choice of materials etc., often being secondary to the final aesthetic result.

Both art and craft can be seen in cultural, social and even political terms. They are also informed by context and narrative. But successful art should convey more creativity than applied craft or technique. And craft is often diminished if it fails to conveys some practical element of function – what’s the point of a beautiful jug if it cannot pour water?

Two recent exhibitions underline how the distinction between “art” and “craft” is often blurred: the Victorian Craft Awards, and MasterMakers at RMIT Gallery. In the Craft Victoria display, most of the pieces had no real practical purpose (other than decoration); yet, in terms of achieving an aesthetic goal, it felt like this was subservient to the materials and the process. While in the RMIT exhibition, there was an emphasis on the materials, plus an acknowledgement that even very technical processes can also result in objects that offer aesthetic pleasure – where form and function truly combine, and are inherently equal in the work. (The Anton Gerner furniture at Craft Victoria also manages to achieve that combination.)

We still don’t really know why the first cave paintings were made – were they an early form of graffiti? do they tell a story or capture events for posterity? were they the result of experimenting with pigments or dyeing techniques? or were they the result of some existential desire to give rise to a form of human expression? or simply to have something nice to look at? But we know we can appreciate them for their aesthetic level as well as their technique – in addition to their historical significance.

Next week: Notes from Phuket

London’s newly re-opened Design Museum welcomes visitors with a bold defining statement of intent. According to the curators, there are only designers, makers and users. To me, this speaks volumes about how the “makers” are now at the forefront of economic activity, and how they are challenging key post-industrial notions of mass-production, mass-consumption and even mass-employment. Above all, as users, we are becoming far more engaged with why, how and where something is designed, made and distributed. And as consumers we are being encouraged to think about and take some responsibility for our choices in terms of environmental impact and sustainability. 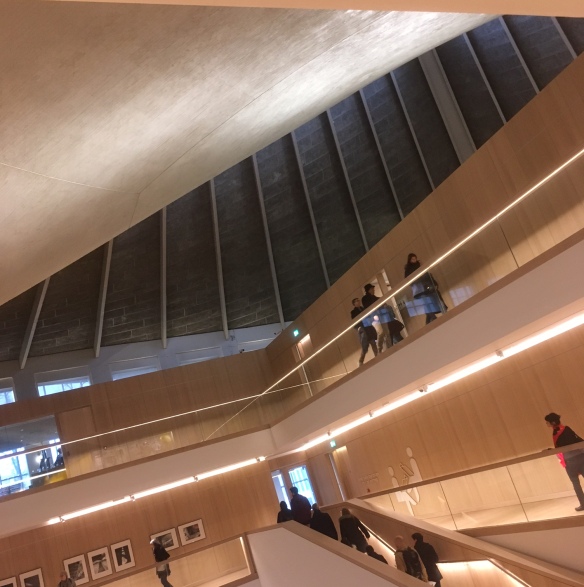 There are several social, economic, technological and environmental movements that have helped to define “maker culture”, so there isn’t really a single, neat theory sitting behind it all. Here is a (highly selective) list of the key elements that have directly or indirectly contributed to this trend:

Hacking – this is not about cracking network security systems, but about learning how to make fixes when things that don’t work the way that we want them to, or for creating new solutions to existing problems – see also “life hacks”, hackathons or something like BBC’s Big Life Fix. Sort of “necessity is the mother of invention”.

Open source – providing easier access to coding tools, software programs, computing components and data sources has helped to reduce setup costs for new businesses and tech startups, and deconstructed/demystified traditional development processes. Encompasses everything from Linux to Arduino; from Github to public APIs; from AI bots to widget libraries; from Touch Board to F.A.T. Lab; from SaaS to small-scale 3-D printers.

Getting Sh*t Done – from the Fitzroy Academy, to Andrea de Chirico’s SUPERLOCAL projects, maker culture can be characterised by those who want: to make things happen; to make a difference; to create (social) impact; to get their hands dirty; to connect with the materials, people, communities and cultures they work with; to disrupt the status quo; to embrace DIY solutions; to learn by doing.

The Etsy Effect – just part of the response to a widespread consumer demand for personalised, customised, hand-made, individual, artisan, crafted, unique and bespoke products. In turn, platforms like the Etsy and Craftsy market places have sparked a whole raft of self-help video guides and online tutorials, where people can not only learn new skills to make things, they can also learn how to patch, repair, re-use, recycle and re-purpose. Also loosely linked to the recent publishing phenomena for new magazines that combine lifestyle, new age culture, philosophy, sustainability, mindfulness, and entrepreneurism with a social conscience.

Startups, Meetups and Co-working Spaces – if the data is to be believed, more and more people want to start their own ventures rather than find employment with an existing organisation. (Under the gig economy, around 40% of the workforce will be self-employed, freelance or contractors within 5 years, so naturally people are having to consider their employment options more carefully.) While starting your own business is not for everyone, the expanding ecosystem of meetups and co-working spaces is enabling would-be entrepreneurs to experiment and explore what’s possible, and to network with like-minded people.

Maker Spaces – also known as fabrication labs (“FabLabs”), they offer direct access to tools and equipment, mostly for things like 3-D printing, laser-cutting and circuit-board assembly, but some commercial facilities have the capacity to support new product prototyping, test manufacturing processes or short-run production lines. (I see this  interface between “cottage industry” digital studios and full-blown production plants as being critical to the development of high-end, niche and specialist engineering and manufacturing services to replace the declining, traditional manufacturing sectors.) Some of the activity is formed around local communities of independent makers, some offer shared workshop spaces and resources. Elsewhere, they are also run as innovation hubs and learning labs.

Analogue Warmth – I’ve written before about my appreciation for all things analogue, and the increased sales of vinyl records and even music cassettes demonstrate that among audiophiles, digital is not always better, that there is something to be said for the tangible format. This preference for analogue, combined with a love of tactile objects and a spirit of DIY has probably reached its apotheosis (in photography at least) through Kelli Anderson’s “This Book Is A Camera”.

Finally, a positive knock-on effect of maker culture is the growing number of educational resources for learning coding, computing, maths and robotics: Raspberry PI, Kano and Tech Will Save Us; KidsLogic, Creative Coding HK and Machinam; Robogals, Techcamp and robokids. We can all understand the importance of learning these skills as part of a well-rounded education, because as Mark Pascall, founder of 3months.com, recently commented:

“I’m not going to advise my kids to embark on careers that have long expensive training programs (e.g. doctors/lawyer etc). AI is already starting to give better results.”

Better to learn how things work, how to design and make them, how to repair them etc., so that we have core skills that can adapt as technology changes.

Next week: Life Lessons from the Techstars founders