Q: What do a selection of 19th century oil paintings, a 50-year old piece of 16mm film, and a 21st century carpet have in common?

A: They are all exhibits in ACMI’s winter show, “Light”, based on works from the Tate’s Collection.

Despite ACMI’s brief to showcase the moving image, only three of the art works in the exhibition consist of film. A few more incorporate movement in the form of kinetic sculptures. But otherwise, this is mostly a collection of paintings and photography (and yes, a carpet).

Does it work? Yes, because just as light can be regarded as an essential building material, the use, portrayal and capture of light is essential to render colour, shadow, depth, perspective and narrative in all forms of art.

Arranged thematically, by theory or technique of how light is represented and rendered in art, the exhibition is both diverse and cohesive. It avoids the risk of overload because the selection is quite compact (given the wide remit of the topic). It also avoids choosing works based on technical prowess alone. Therefore, the exhibition succeeds through the combined principles of quality over quantity, and content over form.

It was timely to see mention of The Enlightenment as a key source of artistic exploration, as well as being a driver in the fields of of scientific discovery and liberalism. The exchange of ideas between and across different disciplines has always been essential to progress in the sciences, the arts and the humanities.

My favourite exhibits among the works I hadn’t seen before were by Olafur Eliason, Lis Rhodes and Peter Sedgley. And it’s always a pleasure to immerse yourself in one of James Turrell‘s installations. The only slight disappointment was that visitors are kept at quite a distance from Yayoi Kusama‘s The Passing Winter, an intriguing cube-shaped sculpture that is like one of her infinity rooms in miniature. The last time I saw it in London, it was possible to peer right in to get the full effect.

All in all, highly recommended.

Next week: Hands on the wheel

As regular readers of this blog may have come to realise, any opportunity I have during my overseas travels, for business or pleasure, I always like to visit the local public art galleries. Apart from providing a cultural fix, these institutions can reveal a lot about current fashions, curatorial trends and even technology adoption in the elite world of marquee museums. Earlier this month, I was fortunate enough to visit MoMA in New York, and SFMOMA in San Francisco. 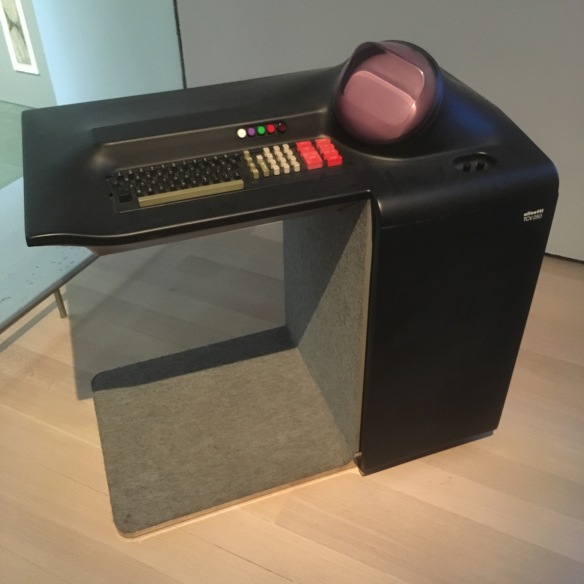 Both museums are housed in contemporary buildings which, in keeping with a noticeable trend among modern galleries and museums, emphasise their vertical structure. Compared to say, the 18th/19th century museums of London, Paris and Berlin (with their long, languid and hall-like galleries), these 21st century constructs force us to look upwards – both physically, and perhaps metaphorically, as they aspire to represent “high” art in a modern context?

Although I have been to MoMA many times before, there is always something new to discover among the touring exhibitions and permanent collections. On this latest visit, there were four standout displays: Thinking Machines: Art and Design in the Computer Age (see illustration above); Louise Bourgeois: An Unfolding Portrait; Max Ernst: Beyond Painting; and Stephen Shore.

Apart from the latter, there is clearly a statement being made within the format of “Title/Name – colon – concept/context/subtext”. Stephen Shore is obviously an exception to this curatorial technique. Here is a photographer, whose name I was not familiar with, but whose work seemed both familiar (everyday images and popular icons) and exotic (otherworldly, outsider, alien); yet also pedestrian (repetitive, mundane) and alienating (elements of the macabre and voyeuristic).

The Thinking Machines display threw up some interesting juxtapositions: most of the devices and the works they produced were artisanal in approach – one-off pieces, requiring detailed and skilled programming, and not the mass-produced, easily replicated works we associate with most digital processes these days. Plus, even when the outputs were generated by a computational approach, the vagaries of the hardware and software meant the works were more likely to produce chance results, given the large role that analog processes still played in these systems-defined creations.

Louise Bourgeois’ work can still challenge our sensibilities, especially when conveyed through her lesser-known works on paper, even though many of the images are familiar to us from her sculptures and installation pieces (the latter represented here in the form of one of her giant spiders).

The exhibition of works on paper by Max Ernst also reveal another aspect of the artist’s oeuvre, although unlike Bourgeois, I feel there is greater affinity with his more formal paintings because, despite the different media in which he worked, there is a consistency to his image making and his visual language.

Across the country in San Francisco, this was the first time I had been to SFMOMA, so in the available time, I tried to see EVERYTHING, on all 6 levels. But I still manged to miss one entire floor, housing the late 19th century/early 20th century permanent collection.

So, less of the colon-delineated concepts compared to MoMA, and more literal titles – and you have to think that photographers, like Shore and Evans, don’t merit these sub-textual descriptions, because with photographers, what you see is what you get?  On the other hand, with Bourgeois’ Spiders, it contains what it says on the tin – giant spider sculptures.

I’d seen the Rauschenberg exhibition earlier this year at the Tate Modern in London, as it’s actually a touring show curated by MoMA itself. Seeing these (now familiar) works in another setting revealed aspects that I hadn’t appreciated before – such as the similarities between Rauschenberg’s collages and combines, and the mixed media works of Max Ernst and other Surrealists, for example.

The Evans exhibition was an exhaustive (and at times exhausting) career retrospective. In addition to many of his iconic images of crop farmers during the Great Depression, there were more urbane/mundane images of shop window displays, merchandising and branding – not too dissimilar to some of Shore’s serial photo essays.

Wandering through (or approaching…) the American Abstraction display was like immersing oneself in a who’s who of modern US art: Brice Marden, Sol Le Wit, Robert Motherwell, Clyfford Still, Cy Twombly, Adolph Gottlieb, Morris Louis, Sam Francis, Ellsworth Kelly, Lee Krasner, Agnes Martin, Sean Scully, Frank Stella, Joan Mitchell…. It struck me that despite the differences among these artists, and their individual mark making and contrasting visual languages, the collection was very much of a whole – the familiarity of many of these works, in close proximity, felt very comforting, even though the original intent was potentially to shock, challenge or disrupt. That’s not to say the works no longer have any impact, it’s just that our tastes and experiences have led us to adapt to and accommodate these once abrasive images.

Finally Soundtracks was probably the weakest of all the exhibitions I saw, pulling together a mish-mash of mostly sculptural and installation works embodying some form of audio element. My interest in this vein of work probably started when I saw the exhibition, “Ecouter Par Les Yeux” many years ago in Paris.

Despite a few banal pieces (too literal or pedestrian in their execution) this current incarnation had some individually engaging and landmark pieces: namely, Celeste Boursier-Mougenot’s “Clinamen”, a version of which has been on display at Melbourne’s NGV in recent times; and Brian Eno’s “Compact Forest Proposal”, which I only know of through its audio component – so here was a chance to walk through the fully realised, and dream-like installation.

As 2017 draws to a close, Content in Context will be taking a (much-needed) break for the holidays. Having made 8 overseas trips in the past 12 months, the author is looking forward to spending some down-time closer to home. Many thanks to all the people who have made 2017 such a truly memorable year for me – for all sorts of personal and professional reasons. You know who you are. Normal service will resume in January, and have a safe, peaceful and uplifting festive season.