I was first introduced to the box set phenomenon in 1974, when I received a collection of novels by J G Ballard for my birthday. This led to an on-off interest in sci-fi (Asimov, Aldis, Bradbury, Dick, Spinrad, Crichton et al). It also made me aware that curators (like librarians) have an enormous influence on the cultural content we consume, and the way we consume it. Even more so nowadays with streaming and on-demand services. Welcome to the binge society. 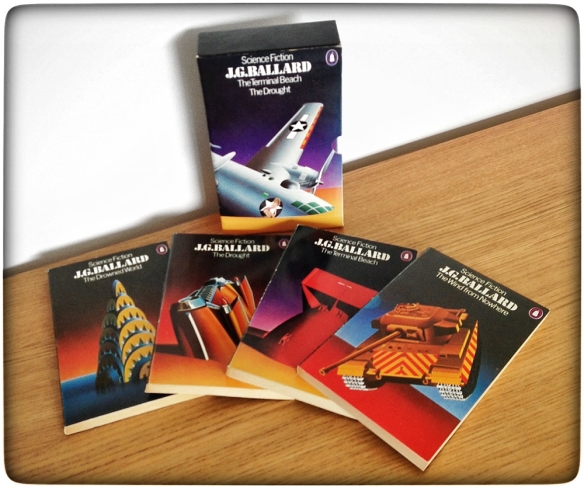 With network TV being so rubbish (who needs more “reality” shows, formulaic sit-coms or re-hashed police procedurals?) I am slowly being drawn back into the Siren-like charms of Netflix. More on that in a  moment.

Box set culture has been especially prevalent in the music industry, despite or even because of downloading and streaming services. It’s possible to buy the complete works of particular artists, or curated compilations of entire record labels, music genres or defining eras of music. It’s a niche, but growing, business. In recent times, I have been lured into buying extensive box set retrospectives of major artists (notably Bowie, Pink Floyd, The Fall, Kraftwerk), as well as extended editions of classic albums (Beatles, Beach Boys), and first time releases of exhumed and near-mythical “lost” albums (Big Star, Brian Eno, Beach Boys again). I like to justify these acquisitions on the basis that they are significant works in the canon of contemporary music. But only die-hard fans would attempt to embrace the monumental box set put out recently by King Crimson – comprising a 27-disc compilation of just TWO(!) years in the band’s history.

Death (and/or lapsed copyright) has become a fertile ground for box set curators and re-issue compilers, whether in literature, film or TV, as well as music. I’m sure there are publishers and editors maintaining lists of their dream compilations, waiting for the right moment to release them (a bit like the TV stations and newspapers who keep their updated obituaries of the Queen on standby). Sadly, in the case of Mark E Smith of The Fall, his death was immediately preceded by a significant box set release (tempting fate?). And as for Bowie, he had no doubt planned his legacy (and now posthumous) retrospectives prior to his own demise.

On the other hand, streaming services create the false impression we are in control of what we listen to or watch. Unless we meticulously search, select and curate our own individual playlists, we are at the mercy of algorithms that are based on crowd-sourced behaviours that are imposed upon our own personal preferences. These algorithms are based on what is merely popular, or what the service providers are being paid to promote. And while it is possible to be pleasantly surprised by these semi-autonomous choices, too often they result in the lowest common denominator of what constitutes popular taste.

And so to Netflix, and the recent resurgence in pay TV drama. Binge watching (and box set culture in general) has apparently heralded a “golden age of television“ (warning: plug for Sky TV). But depending on your viewpoint, binge watching is either a “boon to shared culture“ (the normally stoical New Statesman) or results in “half-baked content” (the usually culturally progressive Guardian). Typically, the Independent is on the fence, acknowledging that binge viewing has “changed the way TV is made“ (and watched) but at what price? Not to be left out, even Readers Digest has published some “handy health tips for binge-TV addicts“. Meanwhile, Netflix itself has released some research on how binge-watching informs our viewing habits (and presumably, our related consumer behaviours). And not everyone thinks this obsession with binge watching is healthy, or even good for business – presumably because it is not sustainable, as consumers will continue to expect/demand more and more at lower and lower subscription fees.

Meanwhile, for a totally different pace of binge-watching, SBS recently tested audience interest in “slow TV”. The free-to-air network screened a 3 hour, non-stop and ad-free documentary (with neither a voice-over narrative nor a musical soundtrack) featuring a journey on Australia’s Ghan railway. So successful was the experiment, not only did the train company’s website crash as viewers tried to find out about tickets, but SBS broadcast a 17 hour version just days later.

Next week: Infrastructure – too precious to be left to the pollies…