Well, what just happened there? In a Federal election that was Labor’s to lose (based on all the published opinion polls), the opposition ended up conceding defeat within just a few hours of the ballot closing. Despite the negative national swing away from the Coalition, Labor suffered an even greater negative swing.

Although populist parties gained votes at the expense of the two major parties, they failed to pick up any seats – rather, Labor lost too many seats. The Greens held on to their one seat, while the balance held by other minor parties also remained the same. All of which enabled the Coalition to form majority government. Sure, there were some significant variations in each State (and the Coalition will have to rely on minority parties in the Senate), but overall Labor was the biggest loser.

Yet it was still a pretty close outcome, and as I expected, the deciding factor was Queensland (and Adani).

A key problem for Labor was that rather than beating up “the big end of town”, and advocating a form of class war (thru the implied politics of envy), it should have found a way to help the working population adapt to the reality of a changing economy. Plus, instead of just imposing a carbon tax, it should have offered more incentives to decarbonise.

Equally, during the campaign there was no discussion by either major party on the need for structural economic reforms around competition, productivity and the tangible outcomes of public services.

Labor has since pretty much abandoned key fiscal policies it took to the electorate, with its new leader claiming that the party must appeal to “aspirational Australians” (whatever that means). For me, this implies that people need to feel incentivised to contribute more, while also feeling they are able to keep more of what they earn, through their additional efforts. In fact, the new shadow finance minister has commented on the lack of productivity gains (reflected in large part by wage stagnation?). Whereas, the previous Labor leadership talked endlessly about “ordinary Australians” (whatever that means).

The re-elected Prime Minister, meanwhile, credited “quiet Australians” (whatever that means) for the Coalition’s success.

Somewhat worryingly, the Prime Minister described his win as a “miracle”, and has made a significant personal statement through his own churchgoing habits, while a former Labor Prime Minister said his party needed to “reconnect with people of faith”. The sacking of a leading sportsman for making bigoted comments on social media (because his religion wanted him to say those things) has led to a prominent Coalition senator to seek an administrative review of the decision, on the grounds that expressing religious views cannot be cause for dismissal. The consequence of such a position is that “religious freedoms” effectively protect hate speech. And there was I thinking that we lived in a secular country…

Both major parties have to overcome continuing and significant internal divisions in the wake of their respective election results. Labor’s factionalism has already been on display again with the way its uncontested leadership contest was stitched up in more murky back room deals. And the Coalition’s more conservative members from Queensland will be expecting huge rewards for having delivered the party a surprise win.

Whether or not Australia’s Federal poll result was another example of the populist trend that was started by the Brexit referendum, confirmed with Trump’s success, and now extended following the EU elections, is open to debate. But it’s clear that traditional assumptions concerning the western democratic process have been subverted, in large part by the arrogance and complacency of the very same political parties that have hitherto underpinned them, that were also forged by them, but which now appear willing to undermine them.

Next week: The Finnies

At the time of publication, Australia is four days out from a General Election. At the time of writing, I have submitted my postal vote, as I will be overseas on polling day (May 18). I am certainly not going to call the result or predict the outcome, except to say it will probably be far closer than most people would have expected, maybe even a hung Parliament, with an even more fractious Senate. But I have to say that this has probably been the most difficult ballot I have had to complete. 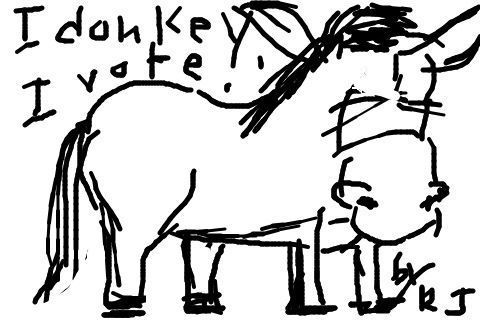 Image sourced from The Donkey Vote

For one thing, I can’t see why either of the major parties deserve my vote. Plus, in my own constituency for the lower house, the ALP candidate has been disendorsed, so as a result, I have been denied the option of voting for the official opposition. (More on this disendorsement later.) (Meanwhile the only Green Party MP who sits in the lower house and who represents my constituency, labelled himself an “independent voice”. Does that mean he no longer represents the views of the Green Party?)

Why do I feel this way about the two major parties?

First, neither party leader inspires me – they are purely products of their political organisations and their respective factions, and display very few leadership qualities other than they probably know how to stitch together half-baked policy deals in their party meeting back rooms. I doubt they have ever had an original idea, and certainly not since they became the leaders of their particular factions, let alone leaders of their parties.

Second, both parties have simply been sloshing around tax payers’ cash – funding here, pork barrels there, sleights of hand all over the place. I agree that most areas of public services and infrastructure demand a rethink on their current funding models, and some deserve more money. But from what I have been able to glean so far, most of these funding commitments and/or budget re-allocations are mostly about headline amounts, and not measurable outcomes, assuming they have been properly costed in the first place.

Third, despite all the money on offer, there have been few, if any, announcements on more fundamental issues of economic and structural reform such as competition policy, productivity measures, innovation, startups, etc. Yes, there have been some financial and tax incentives thrown out to small businesses who take on more staff, or who invest in new equipment, but these are just the usual tweaks. And there has been very little debate about the need to review the design, delivery, quality and accountability of public sector services.

Fourth, and the one main thing that the major parties have in common, is that the only policy levers they seem willing to push/pull are continued fiddling about with tax rates, superannuation and industrial relations. All of which is counterproductive, as it just means the focus is on winners and losers, and the resulting class-war based “politics of envy” and crass take-downs of the “big end of town”.

So let’s talk about jobs.

Much of the money ear-marked for particular industries or service sectors is intended to support job creation. Where are most people employed in Australia? By industry category, the top sectors are: Health Care; Retail; Construction; Professional, Scientific and Technical Services; and Education. Most of which are destined to be the recipients of tax payer-funded largesse after the election. And while I agree that Health, Education and Public Infrastructure need to be adequately and properly resourced, innovation and the high-tech jobs of the future will more likely come from the Professional, Scientific and Technical Services sector. (And $3m for a “Blockchain Academy” is woefully inadequate for long-term thinking and vision.)

But as should be obvious to anyone, industries don’t create jobs, companies do. And most people in Australia (70% of the working population) are employed by small to medium-sized businesses. Of the nearly 2.2m registered businesses, 60% have zero employees (mostly they are owner-operated sole traders, including self-employed tradespeople), more than a quarter of businesses employ fewer than 5 people, nearly 10% of businesses employ between 5 and 20 people, 2.4% employ between 20 and 200 people, and only 0.2% of businesses (c. 3,800 companies) employ more than 200 people. In addition, only 100,000 businesses have an annual turnover of $2m or more. Welcome to the long tail of the Australian economy.

As for the election outcome itself, it will largely be determined by swing voters in marginal seats. Five of the 10 most marginal seats are in Queensland. And with the Adani mine project being such a divisive topic, this one item could determine who takes government. And even if Labor wins a majority in the House of Representatives, the Senate will be even more split between minor parties, and whoever wins government will find it difficult to navigate the upper chamber. In my own state of Victoria, there are something like 30 party groupings and around 80 individual candidates standing for just 6 seats. Trying to research the minor parties and their candidates or their labyrinthine preference deals is virtually impossible, which cannot be healthy for the democratic process under the proportional representation system of the single transferable vote model.

The real issue, though, is that with 3-year Federal Parliaments, parties are in perpetual campaigning mode. There is very little long-term thinking or vision, while short-term compromises are the order of the day. All of which results in either total inertia when it comes to making any real structural change, or constant policy tweaking to keep ahead in the polls. All hot air and no momentum.

Finally, coming back to the disendorsed Labor candidate for the lower house in my constituency of Melbourne. The party was forced to act (albeit somewhat reluctantly and almost equivocally) when the candidate’s social media past caught up with him. At first, the party and its Leadership suggested that the 29-year old candidate should be forgiven his indiscretions because he was “only” 22 at the time said offensive remarks were posted. I think that argument is total hogwash. If you are not going to be held responsible or accountable for the consequences of your actions at the age of 22, then you should not have the right to vote, get married, have children, stand for election, serve on a jury, sign a contract or take out a mortgage because clearly you have not fully developed as a mature adult, and your capacity to think and make important decisions is obviously impaired, such that you cannot be relied upon to exercise reasonable judgement.

Next week: Trends in LegalTech