How significant is one suburb’s contribution to the startup ecosystem in Melbourne, if not Victoria or even Australia? Well, if the recent panel on Digital Richmond (plus the Victorian Minister for Small Business, Innovation & Trade) are to be believed, VIC 3121 is the epicentre of all things startup. 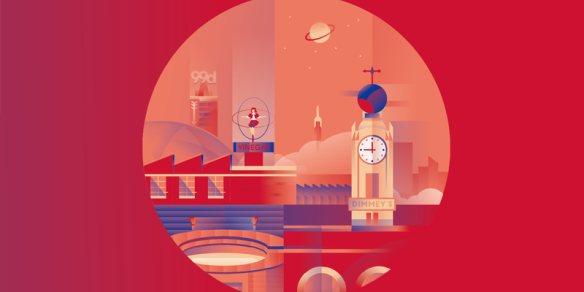 According to the event description, Richmond (and the adjoining area of Cremorne) is “the stomping ground of choice for Melbourne’s established tech companies and aspiring start-ups alike”.

Hosted in the offices of 99Designs (celebrating bringing their HQ back to Richmond), a panel representing some of the biggest names among Australia’s tech companies (and all local heroes) explored what makes “Digital Richmond” tick – but also identified some of the challenges of growing and sustaining scale-up ventures beyond the confines of a few co-working spaces in converted warehouses and textile factories….

To set the scene, mention was made of other established Australian tech-based companies also HQ’d in Melbourne (MYOB and SEEK, the latter of which is also relocating its offices to Richmond), recent local successes such as Rome2Rio and CultureAmp (both born in Richmond), and the steady stream of global tech brands that have come to call 3121 their regional/national home, such as Stripe, Slack, Square and Etsy.

It was evident that each of the panel have previous business connections with one or more of their fellow panelists – so maybe there is simply value in being in close proximity to each other. Success begets success, especially when people are more willing to share connections and introduce new contacts into their networks. (Although, what might this say about diversity? And does it reinforce the notion that “it’s not what you know, it’s who you know”?)

Despite the number of co-working spaces and tech companies based locally, there are very few substantial, modern office buildings in the area, and only one business park of note. Local startups that need more space will likely have to relocate elsewhere.

Property aside, the panel considered other local infrastructure is generally conducive to success – access to public transport (although Richmond and East Richmond stations are both in serious need of an upgrade), a solid talent base, great coffee shops and proximity to the CBD.

On the downside, there was criticism at the lack of NBN access in such a concentrated pocket of tech companies and startups (with the associated numbers of contractors, freelancers and other members of the gig economy who live in the area and work from home). Car parking was also an issue, although with Richmond being a major public transport hub, I was surprised that this came up. A lack of child care facilities was also mentioned.

Being an inner city suburb, with strict planning laws and designated “heritage overlay” regulations, there are limits to the amount of development that can take place, especially as Richmond and Cremorne are also established residential areas, with medium to high population density. Getting the balance right between economic growth, urban renewal, modernisation and local community preservation is tricky – pity that the organisers had not thought to invite anyone from the local council.

The panel also bemoaned the absence of any tertiary education facilities in the area (by implication, does that mean the Kangan Institute campus in Cremorne doesn’t meet local requirements?). But maybe there are other ways to connect with academia?

The panel discussion then moved on to topics that are beyond the control of the local council or even the State government, yet each has an impact on the startup economy: corporate tax rates; employment visas; the schooling system; vocational education and training; and the need for inter-disciplinary and inter-generational hiring. (They may as well have added industrial relations laws, the productivity debate and smart cities – oh, and the National Innovation and Science Agenda.)

I was also surprised at one of the reasons given for 99Designs bringing their global HQ back to Australia – the appeal of an ASX listing. I know that Australia has one of the largest pools of pension funds in the world, and nearly every person in Australia has direct or indirect investments in Australian equities within their superannuation portfolio. But despite being ranked 15th by market capitalisation, the ASX represents less than 2% of the global market, and even after 25 years without a recession, Australia’s capital markets risk being left behind. If we are to grow the local tech sector, there needs to be much more alignment between where (and what type of) capital is needed, and where the pension funds and other institutional investors like to put their money.

Finally, I always get worried when the likes of Carsales, REA Group, MYOB and SEEK are held up as poster children for the local tech and startup sectors – great businesses, sure, but all about to be totally disrupted by the next wave of startups, and not quite the high-tech sectors that the Victorian government wants to champion (FinTech, MedTech, BioTech, NanoTech, AgriTech, Cyber Security, Smart Manufacturing, EduTech….).

Next week: The NAB SME Hackathon