Is Banksy the most contemporary of artists? The main medium he works in (spray paint) and the primary format he uses (street art) are synonymous with urban graffiti art. His re-appropriation and re-contextualisation of images and icons tend to both support and subvert traditional notions of art production, the commercial gallery system and copyright law. These same concepts are likewise being challenged via the use of digital technology, social media platforms and creative commons licensing. 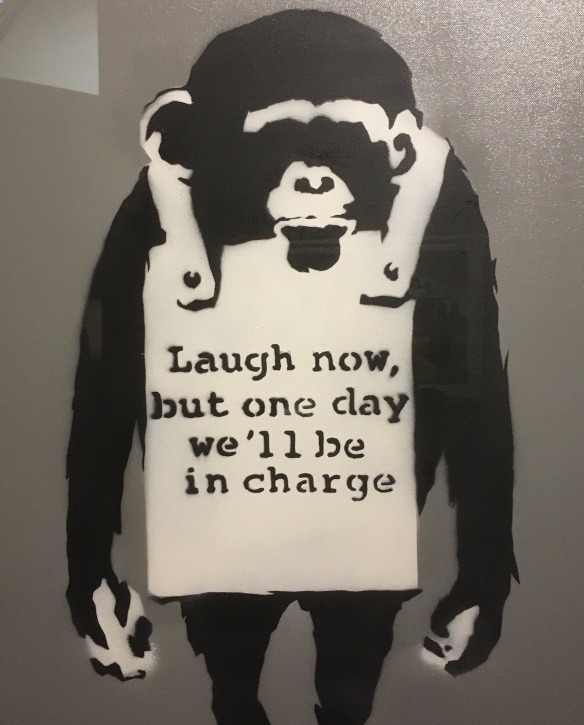 The current retrospective of Banksy’s art in Melbourne is an intriguing exhibition – part homage, part entertainment, part circus sideshow, part social event. It’s nevertheless a calculated commercial venture, given the local veneration of street artists and their work in the city’s laneways (including some of Banksy’s which have been destroyed in recent times…). Plus, on the way out, there is the gallery shop with mass-produced copies of Banksy’s art, souvenirs and street wear.*

Everything Banksy does is designed to provoke a reaction – even if it’s just a snigger at some of the rather obvious visual gags. Even his (or her?) anonymity is used to reinforce the enigma of the artist as outsider (and sometime outlaw), while potentially allowing multiple artists to operate behind the assumed identity of “Banksy”.

Banksy’s use of a corporate-style logo creates the impression of a brand, and as one of my colleagues noted, it also acts as a meme which spurs both imitators and detractors. Using a distinctive and standardised logo as a signature also suggests there may be a production line process behind the scenes, some factory or warehouse where either minions or wannabe Banksys manufacture art to a predetermined design or theme.

For all his rebellious intentions, Banksy echoes the work of established artists – Andy Warhol, Keith Haring, Marcel Duchamp, Damien Hirst, Barbara Kruger, Jenny Holzer etc. He parodies, repurposes or references iconic images such as Warhol’s “Marilyn” screen print portraits, Joe Rosenthal’s photo of the US flag being raised on Imo Jiwa in WWII, and the infamous addition of a green mohican hairstyle to Winston Churchill’s statue. And he obviously has an affection for the sayings of Oscar Wilde, going by the aphorisms and witticisms that decorate the walls:

“Art should comfort the disturbed, and disturb the comfortable”

There is every reason to suspect that even this exhibition will somehow be considered just another Banksy art prank, rather than a critical assessment of his work. I suspect that there were hidden cameras and other means to capture the audience engagement and reaction. The website is careful to state that the exhibition is “100% Unauthorised – Guaranteed”, thereby allowing Banksy to disassociate himself with the event.

The exhibition’s public face is Steve Lazarides’s (Banksy’s former dealer and curator), who possibly still owns much of the work (or likely knows the people who do). There are other statements that Banksy does not directly benefit from sales of his work in the secondary market, and in any event, copyright in many of the works is in the public domain – meaning Banksy has either formally assigned his copyright to the public, or does not wish to claim or exercise any copyright over it. In theory, anyone can make copies of the original pieces (there being no copyright protection) but no-body can claim copyright in the resulting image or work. So, for some of Banksy’s prints, t-shirts and other multiples, it begs the question, what is an “original” Banksy – the ones in the gallery, or the ones in the gift shop?

*Not surprising, given the title of a notorious Banksy documentary, “Exit Through The Gift Shop”