For serious music collectors, Japan is like an oasis in a desert of digital downloads and streaming services. Not only does Japan still have bricks and mortar record shops, it also boasts a couple of well-known chain stores, in the guise of Tower Records and HMV, although both brands operate under local licenses totally unconnected with their original US and UK parent companies. 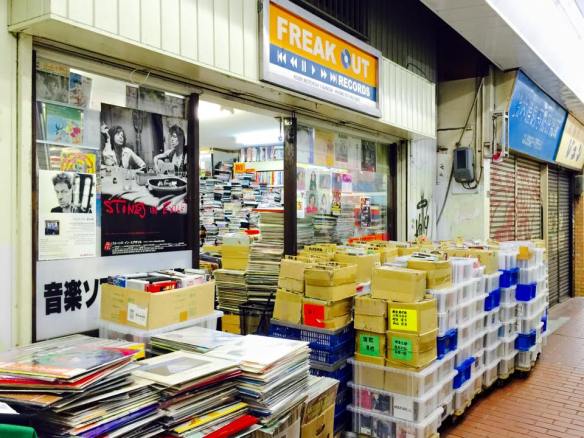 On my recent tour of Japan, I spent several hours visiting some of the crate-digging hubs of Kobe, Kyoto and Tokyo. I barely scratched the surface, but still managed to come across some interesting finds.

Whether it’s the country’s aging population, the love of tactile objects combined with a strong design aesthetic, or just that national obsession with detail and authenticity when it comes to pursuing hobbies and interests; whatever the reason, Japan has established a reputation for being a paradise for lovers of vinyl records, CDs and cassettes.

For collectors like myself, it seems like all the unwanted and discarded records from around the world have ended up in Japan’s second hand music shops to be (re)discovered and appreciated by audiophiles, hipsters and analogue enthusiasts.

Here is just a small glimpse of what dedicated music lovers and crate-diggers can experience in Japan.

The Motoko market (a series of cramped arcades underneath the railway lines) has at least a dozen second-hand music stores stuffed with vinyl. A few of these shops specialise in particular genres, and some also sell new independent releases. What they all have in common are over-stacked racks and heaving shelf units shoved close together, forcing shoppers to crab-walk very carefully between piles of records, at considerable risk of triggering a vinyl avalanche.

Some of the stores arrange their stock meticulously by type and artist, but not much help if you don’t read Japanese; others seemed to have given up cataloguing the stock, so if you are searching for a specific record, it’s like looking for a needle in a haystack.

At times, it felt like this was the end of the line for many of the items on display – if they can’t find a buyer here, there probably isn’t much hope for them anywhere. No doubt there is a lot of on-line trading behind the scenes, and prices were generally reasonable, so maybe the shops are more like warehouses open to the public?

Poring through some of the 70s vinyl was something of an education, as I came across albums I had never seen before, even though I worked in a second-hand record store in London in the late 80s. I resisted the temptation to buy some of the older Japanese pressings (especially at Wild Honey Pie), even though they have a reputation for superior sound quality, but I did pick up a Japanese edition of the first Y.M.O. album on CD at Freak Out Records.

Armed with a handy crate-digging map of Kyoto, I checked out several shops located near City Hall. Unlike their Kobe counterparts, these were neat and orderly boutiques, and were easy to browse. None of the stores are at street level, so navigation can be challenging. The map lists stores by genre and other specialisations, although some of the music categories can seem bewildering.

I spent most time at 100000t alonetoco (I think it means something like “100,000 tonnes of records”?), which has a good range of vinyl and CD, from classic rock to contemporary sounds, from soundtracks to electronica, plus books and other memorabilia. The owner stocks numerous Japan-only releases by independent US and UK artists, many of which are highly collectible. Speaking of which, I found an absolute bargain – a 1987 compilation CD of the 2nd and 3rd albums by The Pop Group, which was only released in Japan. Copies of this particular pressing are currently listed for sale online from A$145 – mine cost a mere 600 yen….

Also worth checking out is Prototype, which leans toward reggae, soul and funk.

Around the hip Tokyo suburb of Shimokitazawa are a cluster of hi-quality specialist stores, including Jet Set, which is also a label and distributor for local and international releases, mainly indie, techno, beats, ambient and electronica. There are a couple of branches of Dorama, a chain of second-hand CD stores (plus comics, magazines, graphic novels, games and DVDs). Well worth checking out, especially for promotional releases, box sets, jazz, classical, Japanese pop and electronica, and alternative international rock. I managed to find very cheap (less than 300 yen each) and long-deleted Japanese releases by United Future Organization and the late Susumu Yokota. For the latest independent Japanese releases, the Village Vanguard book store has an intriguing music section.

Further towards the city, in Shinjuku, is the institution known as Disk Union (and not Disc Union as my Australian guide-book spells it…). With 10 branches in the Shinjuku area alone (plus more than 20 others across Tokyo and in Osaka), it would probably take several days to check them all out. While they do stock selected new releases, the real attraction of browsing in Disk Union is the sheer breadth of second-hand, deleted and promotional items on sale. A case in point being the special Japanese edition of the recent David Bowie “Five Years” box set – looks wonderful but too rich for my wallet.

Finally, no trip to Tokyo is complete without a visit to Tower Records in Shibuya. This landmark, multi-storey superstore is constantly being upgraded, even though sales of physical albums are generally on the decline. It caters for most tastes, and many new releases are discounted, making it popular with locals and tourists alike. It’s great for finding the Japanese pressings of international CDs, as they usually feature additional music or limited editions not included in the European or US releases. There’s now even a section just for cassettes, both new releases and re-issues. On this occasion, I found a couple of very limited edition albums by Japan’s Silent Poets, both on sale at regular price, but which I’ve since found listed online for upwards of A$50 each…

Next week: Another weekend, another hacakathon