In the aftermath of its 1976-77 heyday, UK punk rock morphed into five main trends: new wave; goth; new romantics; synth-pop; and post-punk. The latter term was applied to a number of bands that had emerged during the punk era, but were not defined by its limitations. Although they were initially influenced by punk, and shared many of the same attitudes, they had quickly moved beyond the three chord thrash, frenetic pace and nihilism of punk to create music that was more cerebral, complex, challenging and enduring. They were not afraid to reference influences outside punk, such as literature, film and philosophy. Key among these bands were PiL, Gang of Four, The Fall, Wire, Magazine, Pop Group, Cabaret Voltaire and Joy Division. 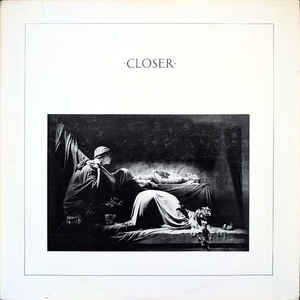 Although Joy Division only released two studio albums (one of which came out just after the band’s singer, Ian Curtis, committed suicide), their influence has been long-lasting. Rather like the Velvet Underground in the late 1960s, many people who heard them early on were inspired to form their own bands. 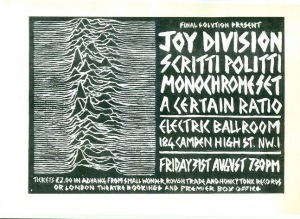 Their first album, “Unknown Pleasures” emerged in June 1979. It was just after Margaret Thatcher had come to power following the strike-ridden “winter of discontent”. The sonic palette created by the band and their producer, Martin Hannett, revealed a post-industrial sound that could only have come from Manchester. At times it sounded nothing like their contemporaries, so strong was their unique musical identity. Reflecting the rugged local landscape surrounding the music’s urban setting, the gritty realism of “Unknown Pleasures” demonstrated that as with British society after Thatcher, music after Joy Division would never be the same again. I first saw them live a few weeks after the album’s release, and already the songs made an indelible impression. 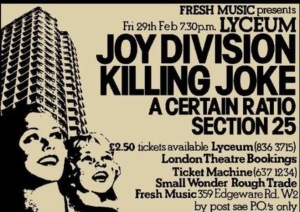 The band was incredibly prolific during the next few months, touring constantly, and releasing a number of non-album tracks and singles. I saw them again in early 1980, by which time they were already playing songs from their next album, as well as their forthcoming single, “Love Will tear Us Apart” – one of the most iconic and frequently covered songs of its era.

The last time I saw Joy Division performing was on the second night of the “Factory By Moonlight” mini-residency at West Hampstead’s Moonlight Club (also artfully referencing Maximilien Luce’s late 19th century painting). I spoke briefly to Ian Curtis before the gig, which turned out to be one of the band’s last concerts. He was polite, and came across as rather shy, but probably he was just exhausted, given the band’s work rate and his own physical and emotional problems. Within a few weeks he was dead. 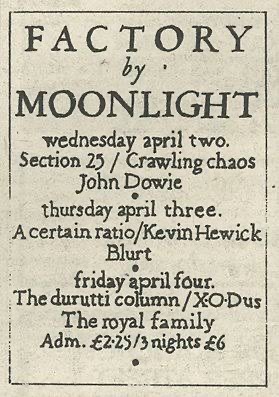 Soon after, the second and final studio album, “Closer” was released. Inevitably, it was seen as a sort of memorial for Curtis, especially given the sleeve’s funereal design (although the image had been selected months earlier). Apart from a couple of uptempo numbers (I am using the term relatively), the songs are melancholic, majestic, and yes, morbid. Whether intentional or not, side two of “Closer” has always reminded me of the mainly instrumental and proto-ambient songs on side two of David Bowie’s “Low” album. (Given that Joy Division’s previous name, Warsaw, owes something to the “Low” track, “Warszawa“, it seems possible that the similarity is deliberate.)

Much has been written about Joy Division over the past 40 years, and a number of commemorative activities are likely in 2020. The band’s presence has been perpetuated not just by the lasting influence of their slim studio output (since bulked out with compilations and live albums) but by the fact that the remaining band members morphed into New Order – one of the most successful bands of the 80s and early 90s who brought electronica to rock music, and rock music to the dance floor.

The other week, my next door neighbour mentioned he had only recently heard “Unknown Pleasures” for the first time – thanks to a playlist recommendation. He hadn’t realised the album was so old, and thought it was a newish release. Hopefully, by now, he has also heard “Closer”.

Next week: Stereolab at Melbourne Zoo