Although sound is supposed to be the weakest sensory trigger for recalling memories, I suspect most of us can readily associate a song or a piece of music with a significant time, event or place we heard it. Indeed, music is often more evocative of our emotional response than either smell or taste, which at a primal level are readily connected with survival and self-preservation. (Music cannot kill or harm us, but poisonous or rancid food can.) 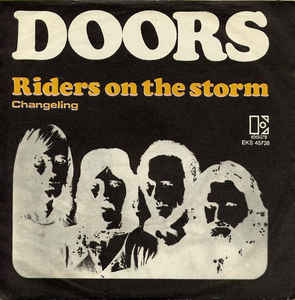 This thought occurred to me recently when I was on a weekend trip to the country with a group of friends. Sitting round the log fire under a starlit sky, The Doors’ “Riders on the storm” came on the streaming playlist. At that particular moment, it seemed an ideal setting to hear this track. Even though I have heard the song many times before, this latest airing has now created a new memory association – the time, the setting, the people I was with, the food and drink we enjoyed.

Of course, in this particular context, it also reminded me of the first time I consciously heard the record. As a young teenager in the mid-seventies, I used to fall asleep listening to my transistor radio, usually tuned into the original UK pirate station, Radio Caroline. Caroline mostly broadcast classic and progressive rock – often playing a whole album without interruption. It introduced me to a lot of bands and music I did not hear on Top 40 or daytime radio – so it was an important part of my musical education.

Road trips seem particularly adept at forming musical associations: in my case, a drive to the Yorkshire coast accompanied by a bootleg tape of the Beach Boy’s “Smile” sessions; a night time journey through the Anza-Borrego Desert, with the roof down, listening to Primal Scream’s “Screamadelica”; and just a couple of months ago, hearing the Pink Floyd song “Wish You Were Here” while touring part of the Croatian coast. Even though I was very familiar with those records before these particular journeys, the specific context of those trips means the music will forever be linked to the events.

I suspect this memory association is largely because our response to, and engagement with music is often dependent on our mood. If we are more alert to and in tune with our surroundings, this receptive state of mind leads us to make mental and emotional links via the accompanying musical soundtrack. These triggers mean that we are more able to recall or even replicate that mood via the use of the associated songs.

All this as The Beatles’ “Abbey Road” celebrates its 50th anniversary. As a child, this was the first Beatles album we had in our home. We already owned a number of their singles, which had a huge impact on my early listening adventures. But “Abbey Road” was probably the first album I really engaged with. Even now, there are large sections I can replay in my head. The song order is likewise entrenched, thanks to the format of the vinyl LP in the pre-shuffle and pre-streaming era. The cathartic extended coda of “I Want You (She’s So Heavy)” at the end of side 1, that gives way to the upbeat and optimistic “Here Comes The Sun” at the start of side 2. I have every expectation that when I next listen to “Abbey Road”, it will still trigger memories of my childhood and listening to the record with my older sisters.